Link to this article: https://orisha.me/kBcxe 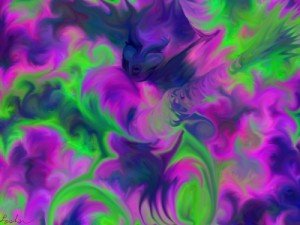 Wind in her hair
Lightning in her eyes
Storms in her voice
And thunder in her thighs!

Oya is the Orisha of wind, storms, thunder, and change.  In some ways, she is very similar to the Hindu deity Kali except that she isn’t considered *the* goddess of death.  That position belongs to Iku.  She can however, be the “wind” that brings death.

Because she works closely with the death aspect of Eshu/Elegua and the disease aspect of Babalu Aye, there are many apatakis that relate them.

Oya is the third wife or second concubine of Shango, the Orisha of fire, lightning, dance, and martial arts.  It is said that after the big rivalry between Oba (Shango’s first wife) and Oshun (Shango’s second wife) blew up into an all out war, Shango banished them both, determined that his next companion, if at all, would be a balanced and supportive woman.

It is interesting to note that in most apatakis about Oya and Shango, they never actually lived together.  Oya liked her peace in the forest, and Shango was a busy man, and already traumatized by rivalry between women.  So for whatever reason, both liked their space, but loved each other.  Despite their not living together, they stayed connected to each other and visited often until both of them died and ascended to the ancestors.

There are many lessons in this.  One may well be that when people are young, there are two main things that are most important in their romantic lives: familial duty and sexual attraction.  So Shango married a dutiful wife first, and a visually stunning wife second.

When we get older though, our priorities change.  Once we’ve raised our kids and  gotten ourselves established, we look to the next horizon, which is pleasure.  Then once we’ve experienced that and realized that not all that glitters is gold, and settled that conflict in ourselves, what we need most is companionship and comradeship in a partner.

So a woman who wants to be her husband’s all should figure out how to balance the Oba, Oshun, and Oya in herself.  Very few of us can, so we may want to learn to be okay, if we marry or are dating a very powerful and intense man with a high Shango energy (or fire element) with “outsourcing” some aspect of these roles.  We need to, like Oya, trust our man’s tastes, and let him have his space.

Back to aspects of Oya though, she is the epitome of female strength.  Contrary to what many may say, she does not represent feminism, but feminine power.  She is an extremely powerful entity, but this is partly because she has had the support, love, and companionship of extremely powerful men or masculine energies.

She guards the graveyard with Eshu, ensuring that graverobbers and disrespecters of the ancestors are punished.  She hunts them down mercilessly.

When humans get too arrogant and settled into their lives, she gets the nod from Eshu and/or Babalu Aye to sweep through with storms, earthquakes, and plagues.  If you can imagine Babalu Aye surfing across the skies on the flowing, violet veil of Oya…scary, but essential so that we don’t become overpopulated or overly stupid.

Lately, there has been a lot of buzz around the sisters of Oya called Afefe and Ayayo.  Afefe is the wind and also unconsciously projected will or magic, and Ayayo is direction or consciously directed sorcery.

In Santeria, and this may be something new by the way, some people are popping up with Ayayo elekes and other items specific to her.  At best, this is ineffective, but at worst, this separation or distinction could lead to a lot of tragedy and hardship for those who take her out of context.  Remember that sometimes Eshu will allow bad things to happen…allow us to undo ourselves to cull the stupid or teach us valuable lessons.

Oya’s sisters are barely mentioned by Africans and those in other groups in the diaspora because even though we are taught they exist, we are also taught that they are inhumane and not to be approached directly.  They are only approached through Oya.

Initiates to most cults of Oya, as well as those children of Oya under secretive, directly passed down knowledge are instructed to keep the sisters out of the eyes of others.  It will bring them grave misfortune.  If you were entrusted with any of their items or led to construct any, they are for your eyes or the eyes of the person you made them for only.  They are not to be displayed to the world.

So hopefully any items you see representing or supposedly embodying the two sisters are just hype to look scary and Gothic…but if Eshu has allowed one to actually activate then there is “hell” around it.

If something has changed, and we are now allowed to separate the inhumane sisters from the humane sister, and move them to the front, I haven’t gotten the memo.  So please be careful out there, and don’t get caught in a “white people trap“.

Oya has a few symbols associated with her.  Among them are the lightning bolt with crossed arrows, the vector or hurricane symbol, nine violet feathers carried by a spiraling wind, nine veils each of a different color, a necklace or skirt with nine colors, and a spiral wind chime made of nine ornamental spearheads.

Oya’s colors vary from place to place, but the main one is purple or dark burghundy or maroon.  She is also symbolized by the nine colors, purple, blue, green, yellow, orange, red, black, white, and brown.  Depending on her function at a given time, she may wear purple and orange to work a storm, dark red to motivate a group of warriors or sportsmen to work as a team, all colors to make a tornado, etc.

She does not eat any four legged animals, but enjoys chicken, especially black feathered or black skinned silkies.  She also doesn’t like palm kernel oil, so be careful with any ingredients you’re cooking with.  Most margerine has it, so just use butter, pure cocoa butter, or chicken fat, but not beef, lard, or lamb fat.  Check the ingredients of any chocolate you offer her as well.  To be safe, I just use cocoa powder to make any chocolate candies I wish to offer her from scratch, or do divination to see which specific chocolates she will accept.

Oya’s “incense” offerings shouldn’t actually be burnt but steamed like potpourri, or sprayed, splashed, or fed to a plant with large leaves.  She doesn’t much like smoke.  She likes grass clippings, green herbs, red and white flowers, and other nice smelling things.  Pine needles are good for her too.

Make sure that any oils you’re using for her don’t contain any palm oil whatsoever.  Also, don’t burn them straight.  Use water, and if it runs low, add a little more water until the candle underneath burns out.  If using essential oils, she likes scents that smell like rain, storms, or their aftermath.  China Rain essential oil blend is a good choice, as is sweetgrass and cyprus.

Zubrowka, which is a special sort of vodka infused with a special kind of grass in the Ukraine.  If you can’t find any, steep some sweet grass or green beans in some vodka for nine days in a dark place.

Smoke is taboo for some traditions of Oya, so for observances, her devotional oil should be diffused on water, not straight on the burner.

Put the cinnamon stick, and then the other dry ingredients into a jar or bottle.  Pour the oil over all.  Take the open jar or bottle outside and let it get some wind.  Then close it and put it in a cool, dark place for at least 3 months.  Take it out and shake it every week on whichever day is sacred to Oya in your tradition (usually Friday in the diaspora), or every 9 days from the time you make it.  Once a month or so, it should also get some air.

Bear in mind that Oya items tend to fly, so for the sake of your floors and other areas of your room that you may want to keep clean, store them above the ground, but in a low place because they can jump off of shelves.

You can go by the seasons, or add other seasonal grasses that smell nice and fresh.  Just put these with some water in the pot of a potpourri burner or cauldron over a flame.

In the diaspora, Oya is said to adore China Rain.  This fresh, rain-like scent just happened to express her energy well, and became a part of many observances and magickal fomulas.  You can buy the original from Terranova, pick one of the many versions made by African scentologists in shops and stands in major cities, or make your own.

One of the food offerings we like to give Oya around here is eggplant shnitzel.  You slice some eggplant, and leach the bitterness out of it by sprinkling some salt on it and leaving it to “bleed” for about half an hour.  Then rinse it off, and pat it dry, and cook as you would any other type of schnitzel.  Coat it in flour, then egg, then breadcrumbs, matzah meal, or cornmeal, and fry it in oil.  Just make sure it’s not palm oil.