Link to this article: https://orisha.me/YuEYl 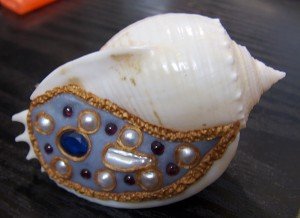 an altar ornament for the Orisha Yemaya

Voodoo is a term used to describe a variety of  polytheistic, panentheistic, and hierarchical monotheistic belief systems rooted in West Africa.  Its more accurate name is Vodun, which means the spirits or essences (of nature).

At its core, it is somewhat agnostic, in that the vast majority of adherents believe that it is impossible to accurately define or imagine the Supreme God.  So rather than treat the Supreme God as a Santa Claus type figure who it’s okay to make our petty requests to, practitioners petition theVodun, Lwa, or Orishas instead.  This serves the dual purpose of avoiding blasphemy and working with nature, rather than against it or in spite of it, to fulfill one’s desires or get things done properly.

Because of political, cultural, and social changes and upheavals, Vodun is not practiced in the same way it was in pre colonial times, even in Africa.  Some changes were for the better, and some for the worse, and some are a matter of opinion.  Overall though, the vast majority of practitioners today are balanced people being true to their time tested ancestral faiths.

What It Is and What It Ain’t

There are a few things about it that are consistent though.  There is the belief that there is or may be a Supreme Being that no human mind can ever fathom.  Whether or not one believes that it exists as a being with a kind of Superpersonality is left to the individual.  It is not considered a relevant question.  If it does exist as we humans think of existence, it exists in all dimensions and is above space and time.  What is relevant are the forces of Nature that we can observe some aspects of, though total understanding of them is also out of the human reach.  Some call this Ultimate Be-ing Mawu-Lisa, Olodumare, Segbe, Nyame, or God.  It depends on the region, language, and to some degree their level of exposure to other belief systems including Islam and Christianity.  Some did not consider the concept of the Almighty relevant for so long, because It is Unfathomable, that the idea simply did not enter their minds, so names of what some would call technically “lesser gods” were used to describe it once they were re exposed to the concept through Judaic faiths.

Then there is the belief in an Emissary of at least the concept of the Almighty.  This is the father-mother aspect of whatever the Force of Creation/Existence is.  The fact that we exist on whatever level that may be is enough to justify the need for some psychological and spiritual representative of the Force of Creation.  This idea has been beneficial to mankind in many ways, one of which is to keep us mindful of the whole of Creation and our duty to it as good residents of the planet Earth.  Some call this Emissary Obatala.

Then there is the belief in a Gate Keeper who, depending on the region/tradition, is at the same time a sort of trickster.  The reason it is both is because it governs perception.  It creates both useful illusions of division and the dangerous illusions that naturally select the foolish or maladaptive out of the realm of the living.  Some call the Gate Keeper Eshu, Elegua, or Legba.

Then, and this is very important, there is the belief that Ancestors must be honored.  Before there was conscious knowledge of DNA and genetics, West Africans understood the importance that the physical and psychological and spiritual traits of the Ancestors, to those living in the present.  In practice, this means that except in some extremely rare cases (that I personally have never heard of) the line of priesthood is ancestral.  Those who are not in an ancestral line are able to serve as priests to a degree, but they will never be in the official line of priests in the vast majority of places in Africa.  They can only receive some degree of endorsement to lead and teach others in their area.  Some practices and knowledge are exclusive to ancestral priests.  Some call the Ancestors Egungun, and some Kulito, and some other terms, depending on their language.

The belief that Nature itself is sacred.  It is not that the mountain has a Spirit.  The mountain is a Spirit-and-a-physical-body.  Scientifically, this could be described as the idea of multidimensional existence.  So when a ritual object has been made and imbued with the ashe or energy of a particular Force of Nature, it does not merely represent it.  It at least in part, embodies that Force of Nature.  Some call these Forces of Nature Orishas, some Orixas, some Alusi, etc.  It depends on language and traditions.  The importance of multidimensional existence or the sacredness of Nature is central to being ridden by the Orishas.  Since we are Soul-bodies, the Forces of Nature can be personified in us at their will even if as humans we are unable to fully grasp the idea of the will of a Force of Nature.  For this reason, we also generally believe that the person does not choose which Force of Nature is at their head or makes contact with them.  The Force of Nature chooses the human to head, ride, or to make contact with at a given moment.

1 thought on “What is Voodoo?”