Link to this article: https://orisha.me/5vKlR 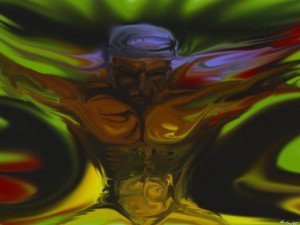 Ogun is an Orisha who many view as having a somewhat dark sensibility.  Many apatakis depict him as being a target of rejection and taunting by other Orishas.  One story that often scares people is the one of his rape of his mother, Yemaya.  Some don’t understand why and how that could have happened, and why that story is told.

The message of such stories are a warning to man about attempting to manipulate the forces of nature overmuch.  We are the servants of Nature, but just as any other servant could, if they’re living in your house or have access to your things, they can do a lot of damage.  The stories of Ogun’s rape of Yemaya are a warning to mankind about using technology to destroy Nature.

Again, Vodun is not a representative faith.  Metals and related minerals are part of Ogun.  Man uses Ogun to rape the Earth (Eseasar or Zodji) and Seas and Life (Yemaya) when he misuses them.  This misuse is the crazed Ogun who is not thinking at all rationally.  Indeed a man is insane when he “poops on his own plate”.

One of the best pages I ever found on the subject of Ogun is a discussion on Destee.com.  Rather than repeat what’s already been written, I thought I’d post that link.  Here’s another excellent page on Ogun at MamiWata.com.

One should remember though, that Shango and Ogun are mortal enemies in a way.  Shango is in the good warrior who is a bit of a hotdogger and show-off.  Ogun is in the decisive assassin of few words: the ninja type.

Excuse the little joke, but it is like a thousands of years old pirates vs. ninjas situation.

The general may carry the sword and use it well, but nobody knows a sword like the man who made it.

Offerings to Ogun should generally be live animals killed during the ceremony.  If you are not comfortable with killing larger animals, you can kill snails and offer them to him.  If you are absolutely against killing any animal that you don’t intend to eat or aren’t defending yourself from, and you’re vegetarian, you can give him roasted yams or spicy beans as a food offering, along with some rum, palm wine, or other strong but tasty alcohol.  Do not ever leave empty bottles standing with the top on once you are Ogun aware.  If a bottle is empty, leave the top off, and if possible, lay it on its side.  If you’re not vegetarian, don’t fret because offerings (ebo) to Ogun don’t go to waste.  You either leave them out for whoever wants to take them, or you and your family/community eat them.

In fact, women who are not children of Ogun or Oya should probably not give blood offerings, at least not themselves.  If you have recently won an election or become the leader of a group or organization, and must give a blood offering, you may ask a man or a female child of Ogun or Oya to do the deed on your behalf.

You can also pay him in pain.  Have a sparring match with someone, and whoever loses the match acts as the sacrifice during the ceremony.  In a pinch or if you are a child of Ogun, you may give him your own blood without fighting first, if your tradition allows for this and has the proper ceremonies for it.  Blood shed in battle is the best though.

In blood offerings Ogun, rather than Eshu, is served first.  He is the only Orisha who can actually kill through unnatural causes.  Where the death face of any of the warriors can cause an incidental, situational, or natural death, Ogun is the only one who is permitted to power a knife or other metal weapon such as a bullet, in the physical realm, and direct it towards a target.  Some supposed suicides of murderers or other bad people may well have been executions carried out by Ogun.

So where one may go to Shango for courage and skill, to make sure that your targets are hit on the battlefield, you should call on Ogun.  Also, when you have to actually kill a sacrifice, being in Ogun awareness will allow you to do it as cleanly and humanely as possible.

In some places in Africa, Odundun (Kalanchoe crenata) and Rinrin (pepper elder) are grown at his shrines.  It is said that these herbs are cooling to him.

“Peperomia pellucida” by Obsidian Soul – Own work. Licensed under CC0 via Wikimedia Commons.

Other herbs that are said to be sacred to him are oak leaves, grape root, and purple basil.

Ogun’s sacred oil is curojo, or red palm oil.  For a change of pace, or if it is not available where you are, this recipe is one of the best I’ve ever seen for Ogun devotional oil.  It was contributed by Arden of Arden’s Arcanum.  Visit him on Facebook to like his page, thank him and give positive feedback.

In a large jar, add the cloves first for Eshu.

Then lightly roast the cumin seeds.

Then add the cumin and the rest of the dry ingredients to the jar.

Put in a cold shadowy place for 4 months.

Crush these as well as possible in a mortar and pestle or in a food processor.

Burn in an iron pot or pan, and when finished, give the cremains back to the Earth.

Ogun is the master of efficiency, and loves soup.  He likes thick, hearty soups that have all the goodness of blood.  This is a good enough offering if you don’t have access to animal blood or snails.  Notice, this is a soup made mostly of things that grow inside the Earth or dark places near the Earth.

Fry the meat and onion until the meat is crumbly and slightly browned.  Then add the herbs and sautee for another minute or two, then add the water and root vegetables.

Bring to a boil, and then turn the heat down to low.

When it is fully cooked, after about 2 hours of low heat, blend it in a blender, with a hand blender, or a food processor.

Serve it to him between warm and hot.