Link to this article: https://orisha.me/RtXuq 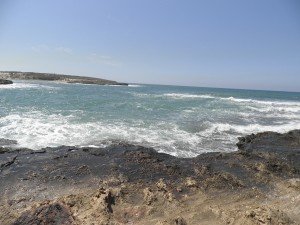 So most of what I’m going to write here is going to be from my family traditions in the southern east coast U.S. diaspora.  There are links to other perspectives of Olokun to the left.

In our tradition, Olokun is viewed as male or masculine, and the spiritual brother and husband of Yemaya.  His sacred numbers and symbols are mostly the same, but with additions such as the trident, the mirror, the sea snake, squid, octopii, and underwater volcanoes.  The latter is where he “holds hands” with Aganju.

Where Yemaya is the waters in general, Olokun is specific to the deep sea.  He is bound to reside there, and this is his kingdom.  When someone dies in the sea, rather than immediately beginning to merge with the Ancestors, they may stay with Olokun until he decides to release them.

He is the patron of Africans in the diaspora, especially those who were taken from Africa as slaves.  When slaves jumped into the sea or sank a ship with themselves in it, rebelling against their captors, they go to the kingdom of Olokun.  Sometimes it is said that the warriors among them with Olokun will pull down ships of countries they were taken to as slaves in the past, so some sailors will give offerings to Olokun and the Ancestors in the Sea before departing.

As he is the Orisha of the deep, he is also the Orisha of deep mysteries.  He is often associated with “dark” or “left hand path” magic and mysticism.  In a way, he embodies the necessary darkness that is within us all: the fight that every living being must have to survive.  In the same way that Yemaya is the creative force of life, Olokun is the equally necessary destructive force of life.  He is rebellion.  He also works very closely with Oya to create devastating storms and floods.

Olokun also has the wealth of the sea.  So he is often petitioned for material wealth.  His closeness to Oya but ownership of wealth sometimes makes him an attractive Orisha for veneration by people who need more wealth in terms of raw materials and commodities.  He is also essential to political power and status.  Though Shango leads the way in raw charisma, Olokun is the master of expanding charisma into the political and social realm on a wider scale than sexual seduction or leading armies.  The faithful and blessed adherent to the ways of Olokun will be able to make nations.

Though followers of Olokun are many, children of Olokun are relatively rare outside of the context of combined Olokun/Yemaya.  Children of Olokun specifically tend to travel a lot and be very busy people.  Many if not most are in physically dangerous professions or are seamen.  They tend to be ferocious (not an understatement) lovers, but don’t count on seeing them very often.  Don’t worry though because if they want to keep you, it may take you the six months to a year to fully physically recover from the experience.

Efun (a special African chalk) and clay or mud statues or figurines are used a lot in the worship of Olokun as well as soperas (covered deep dishes or bowls).  Many designs are drawn on the ground or surfaces to make portals for various energies or direct their flow or to teach important concepts that cannot all be articulated with words.

Olokun likes similar offerings to Yemaya, but more phallic shaped or pointy.  Where you may bring Yemaya mostly round, wet fruit and vegetables, Olokun would appreciate it if you threw some long ones like zucchini and cucumbers in too.  In our practice, we have found that he also likes chocolate and sesame as much as Oya.

A word of caution, he also takes human sacrifices.  One must be very careful not to approach him with too much sorrow, or he may, like Yemaya, send a wave to end all of your sorrows.  Women who are beautiful in a certain way that he likes (you know who you are if it’s you) may also want to be careful.  He can take you to his kingdom to be his bride (or one of them anyway).

Children of Oya are, at least in our observation and experience, less likely to be actually swept into the sea even if he likes them.  They may however, be stimulated by the Olokun while standing in the water.  Just go with the flow.

Do not even jokingly or casually offer yourself or your friends to Olokun during a ceremony.  He may take you up on it, and bless you very much, but your friend will be gone.

Olokun also takes incense, but put his incense in a shell on top of the fire or charcoal.  In our experience, he particularly likes the resin incenses such as myrrh, frankincense, copal, and dragon’s blood.  He also likes aromatic oils.  They will liquefy in the shell and evaporate.  When the shell is black and broken, give it back to the sea.

In some traditions, it is forbidden to give Olokun offerings of fish or shrimp or other sea creatures prepared as food.  Beings who have died or are dying may be returned to the sea, but don’t do it as if this is to feed Olokun with them.  It should be done in the context of returning them home.

He happily accepts offerings of food made with land animals though.  He especially likes slow cooked stews that are spicy and somewhat sweet, like barbecue sauce.  He also likes yams (and sweet potatoes), beans, black eyed peas, and coconut.

Olokun incense is the same as a Yemaya incense, but if you like, you can make it more masculine.  Normally though, I give him incense resins in a shell thusly:

Then proceed with the ritual or ceremony. 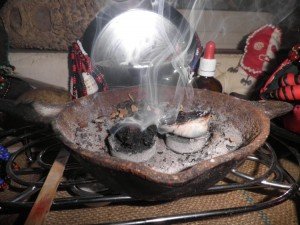