Link to this article: https://orisha.me/7cohk 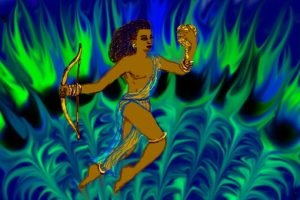 This article is a work in progress.  As more information is confirmed and gathered, it will be added to this article.  If you would like to contribute any information or anecdotes, please write to sister@soulmindbody.net

Logun Ede, also known as Logun or Laro, is often referred to as the prince of the Orishas.  He is the son of Oshun or Oxum and Oxossi/Ochossi or Inle/Erinle.  He is venerated by practitioners of Umbanda, Candomble, Santeria, and it is said, Vodun in Nigeria, though I have never personally seen this.  It may be that in Africa, Logun Ede is given less specific attention outside of a few local observances, but still respected.  In the north American diaspora, he is given lots of love and respect by practitioners in the LGBT community.

Because of the practical inconveniences of his situation, as well as his being neither male nor female, and according to the apatakis, his tendency to lose the women in his life to Shango (there’s a lesson in there), he has never known the love of a woman.  So he is said to technically remain a virgin forever.  The one who finally stuck by him in the end was Yewa, so they are very close and are said share a mutual disdain for Shango.  Remember that the human relations issue is one thing, but the spiritual and nature side is another.  Spiritually, and in nature overall, the Orishas all work in harmony.

The energy of Logun Ede is untouched, untested beauty.  He does not walk.  He floats.  It is not that he does not do things that should get his hands dirty or wound him.  It is that he is so beautiful, dirt is ashamed to stick to his skin, and even the most vicious predators are too enchanted to bear down on him with their teeth.  They allow themselves to be stabbed, strangled, and trapped by him because he is just that good.  In human incarnations, the Sun refuses to age him.  Indeed, his children, those whose head is Logun Ede, have a strangely youthful look their entire lives.  They die of old age eventually, but still beautiful, and often with very few or no gray hairs.

Because of his favor by all forces of Nature, and their willingness to do whatever it takes to make him comfortable, he has been associated by many with the Catholic Saint Expedite.  So devotions to him are added to prayers and workings one wishes to work quickly.

Black eyed peas with corn on the side, and four eggs cut into quarters, garnished with coconut strips  (Click here for a recipe.)