This site is moving to https://orisha.me

I wanted the domain to go to a friend of mine, but she already has one, so I thought I’d at least do something with it that would make her proud.

So update your bookmarks. I’m going to leave this site up awhile to make sure everybody who needs it gets the announcement. The deadline is going to be May 1, 2023.

…so you can see why I would want to archive the content.  There is also a character encoding problem.

If anyone would like to add to this list, please feel free to post.  Mind you, this is a list specifically of Orishas from Yoruba and associated African traditions.  If you have an addition that has thusfar been exclusive or nearly so, to a specific group or region but allows for others outside to give observance, please make that clear.

Eshu/Alagbara/Elegbara/Alagba
Gender: Male
Numbers: 3, 4, multiples of 3
Colors: Black and red or black and white
Domain: Gates, boundaries, borders, crossroads.  Known as the gate keeper between the Orun and the Aye (spirit and physical realms) and the seen and unseen.
Attributes:  Both a protector and a trickster, he can both cause and prevent accidents or misfortune.  He is the master of luck, and can open doors or close them.
Important Notes:  Eshu is served first, except in cases of blood offerings when by default of using a weapon, Ogun is served first.  It is also a good idea to begin any Orisha project or craft by giving some reverence to Eshu first.

Aara
No information found.  Seems to be associated somehow with Oduduwa.

Aasa
Gender: Female
Domain: A river in Nigeria.
Important notes: One of the wives of Lagbonna in a story in which she, Osun, and Yemaya/Yemoja shared the same husband, and he turned them into rivers because of their jealousy and constant fighting.

Adihe
Gender: ?
Domain: Law and Justice
Important Notes:  Said to appear in the form of a chicken, embodied in a bamboo or like material staff and mat, punishes people who come to the king or judge with exaggerated complaints.

Aginju
Gender: Male
Sacred Number: 6
Sacred Color: Red, hot red, red and gold
Embodiments/Symbols: double bladed axe (oshe), obsidian
Domain: Wilderness, wastelands, untouched Nature, volcanoes, the unexplored or uncharted lands, places that man can’t go, places that neither man nor other animals can go, things that man can never know or perceive, freedom, revolution
Associations: Husband of Yemoja, husband of Oshun, father of Shango
Important Notes: Aginju (also known as Aganju) is a very primal force, and may seem rather inhumane, but we all need him to survive.  He is the fire in the belly of the Earth, and part of the mechanism that helps us mammals to be warm blooded.

Ajaye, Olofin
Gender: Generally regarded or referred to as male, although being an aspect of Olodumare, they are all-gendered
Domain: Ashe, energy, life force, vitality, procreation, spark of creation
Important Notes:  This part or aspect of Olodumare gives the Orishas their power, and does not speak directly to humans anymore, except the Ancestors of the first generation.  He created the boundary between the Orun and the Aye, which Eshu now balances and guards.  Now, in order to tap into the Ultimate Olodumare’s Source, we must go through Eshu and meditate on Olorun.

Aje Shaluga
Gender: Depends where and who you ask
Sacred Number: 5 or 7
Sacred Colors: Blue, green, yellow, amber, gold, off-white
Embodiments/Symbols: Cowrie shells
Domain: Wealth, currency and real valuable materials/property specifically, rivers
Associations: Husband/wife of Oshun, Wife of Olokun depending where one is from
Important Notes: He/She is said to be very generous and have a big heart, and will save those who are in dire financial straits who petition him/her with sincerity.

Ara
Gender: Group, male and female
Sacred Colors: Black and yellow
Embodiments/Symbols: Bees nesting in shade trees, a beehive on a odan tree, an angry swarm of bees
Associations: Familiars of Shango
Important Notes: The Ara are deities of thunder, closely tied to Shango.  They may be the “death from the skies” aspect of lightning strikes.

Ayelala
Gender: Female
Sacred Colors: Red and white, red
Embodiments/Symbols: Red or white cross, red or white X
Domain: Justice, fairness, anti-corruption, fair use of power or strength
Important Notes: Ayelala is a venerated and deified Ancestor.  In her material life, she was a slave girl who was sacrificed in place of an adulteress.  She promised that when she died, she would become a guardian of truth and justice, and strike with death, people who broke grave promises and used their power unjustly.  Though her origins are the Ilaje in Ondo state in Nigeria, she is worshiped today as far as Benin because indeed, she does strike down the unjust enemies of those who go to her for help.  Photos of those she has striken are posted outside her temples.

Ogun, Ogoun
Gender: Male
Sacred number: 3, 4
Sacred Colors: Combination of red, black, and green; black and green; iron/gunmetal black
Symbols/embodiments: Tools, Weapons, three legged pot or cauldron perhaps with a chain around it filled with tools according to one’s local traditions
Domain: Earth, metal, gifts from the Earth, technology, creativity, inventiveness, practical intelligence, weapons and the use of weapons, warfare and strategy, industry, labor, work
Important notes: Ogun is one of the most important Orishas to the Yoruba people.  He is to be thanked for a lot of what makes a prosperous and civilized life possible and comfortable.  Click here for an excellent essay on Ogun by Awo Fa’lokun Fatunmbi.

Yemoja, Yemaya
Gender: Female
Sacred number: 7
Sacred colors: Blue, combination of blue and white, sea or river blue/green, transparent blue or blue-green, pearlescent
Symbols/embodiments: Boats, anchors, shells, fish, boating or seafaring equipment, pearls, river opals
Domain: Rivers, water
Important notes: In west Africa, some places she is regarded as the general river owner/embodiment, and some places, the mother of all life on Earth.  Some places give more prominence to Olokun.  What you should do depends on what your ancestry is, what traditions you follow, or where your soul leads you.

You may notice that some of these are a bit different to what you’re used to seeing.  So as not to repeat what others have already written about extensively, here is a page on clarifications about the difference in practice and beliefs between Ifa and related belief systems in Africa and the diaspora.

Often times, ignorant people create strife between Ifa/Orisha practitioners, claiming that if something isn’t done according to their (diaspora) ways, they’re not doing it right.  If they understood how people in Africa manage to coexist and share and exchange information and community spirit despite the differences, perhaps they would learn to do so as well. 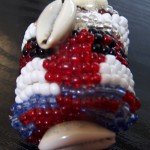 There is a new community for practitioners of Vodun and diaspora belief systems on Facebook.  Afrocentric Vodun is for those who understand that the home of our faith is in Africa, and are actually concerned about African people at home or abroad.  We share articles and photos and discuss topics of concern as well as share personal news, insights, and opinions on Vodun and what we can do for the African community.

Feel free to join and invite your friends as well.