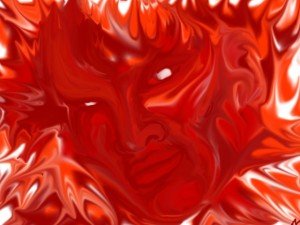 Hot blooded heat incarnate
He is fire and lightning.
If you’re good he is a light
But if you’re bad he’s frightning.

There are many apatakis about his firey temper.  During his mortal life, he was said to have been a powerful mage who could call lightning from the sky.  Some say that the prophet Elijah was given similar powers because, unlike the distracted idol worshipping Jezebel or his equally distracted fellow Hebrews, he brought himself above politics and nitpicking about interpretations of laws, and was given the powers of Shango (to call down fire and lightning) and of Oya (to raise the dead) by the Supreme God.  As a result, he did not die, and was carried personally to heaven by Shango and Oya in the form of a chariot made of fire, carried on a whirlwind.

This is why the prophet Elijah has been raised to the status of an Orisha in his own right, by some who combine Christian beliefs with Vodun.

Shango likes hot peppers and spicy foods.  Just about anything with some heat, he enjoys.  He also likes red apples, bananas, pumpkins, pomegranates, kola, and okra.  One of his favorite foods is cornmeal grits (also called mamaliga or polenta).

He would be very pleased if you take the time to make him some tamales or stuffed corn dumplings pan fried a little in palm oil.  He really likes palm oil (which may be why he chose to love but not reside with Oya, who hates palm oil very much).

I have always gotten the best results from Shango by burning Opium resin oil.  He likes spicy scents very much, and every time I have both burned Opium oil or incense, and worn some on my body, I have attracted a man who changed my life for the better.  Every.  Time.

To be specific, the scents that brought in the Shango energy were pepper and cinnamon.

The Louisiana recipe of Isis oil or powder is also extremely Shango friendly for women.  Men should use the traditional Shango recipe.

Shango does not like women fighting each other.  If you are a female child of Shango or in Shango awareness because you want something from him or need to raise your fire element, you should make peace with the women around you.  This does not mean that you have to give in to their whims.  It just means you should avoid petty conflicts.

Shango also does not like women who don’t respect men or men who don’t respect women.  Respect isn’t the same thing as deference.  If you are a man, you should be behaving like a man, and lead the women in your life who 99% need to be lead.  Few women don’t need this, and if yours does, you need to do that and stop drinking the feminist koolade.

Shango does not like weakness in men.  You may not be a superathlete, but you should be taking care of yourself.  Your biology is connected to your psychology, so taking the time to work out makes you healthier mentally as well as physically.  If you’re disabled, you should be working on your emotional and intellectual dominance.

If you have a home altar for all Orishas, you should have at least one natural fire and/or lightning oriented item to be or contain your part of Shango.  It is difficult to explain in English.  One cannot actually contain an Orisha, but the idea is that the object will embody the Orisha in a way.

If you have boxes, bottles, containers, or soperas for all of the Orishas or all of the ones who are ascended ancestors, then you should have one for Shango as well.  If you do not usually use containers, then don’t start doing that with Shango, or for that matter any of the masculine or warrior type Orishas.

Your Shango items should be nearest to your Eshu items, and yet as far as is possible from the Ogun items.  If you’re limited in space, put the Shango things on the opposite side of Eshu to the Ogun things.  They are both part of the nature of balanced men, but they are also part of the conflict that men have between their brutal selves and their social selves.  So if your Eshu things are in the corner, your Shango things should be on the opposite wall or edge from your Ogun things.

If you have any Shango necklaces or jewelry, they should be stored in a red or red and white bowl or cloth in the Shango section whenever you are not wearing them.

Shango’s symbols are the double bladed axe, lightning bolts, fire balls, and related things.  There are figurines and somewhat officially designated Shango items, but one of the good things about Vodun is that we make use of what we have.

If you have the space and opportunity to make a specific Shango altar, he likes the fireplace or really anyplace where you would make a fire that is not made of iron.  Make fires for Shango on stones, clay, or any kind of earth, even Pyrex or heat save glass, but not in a metal container.  His weapons should be metal, but his fire should be in earth.

In my opinion, weapons placed on the altar for Shango should be real and be sharpened.  Some find it acceptable to use wooden or clay replicas for him, but I do not.  Perhaps this is because they just feel better to me and make me feel more connected to Shango.  Follow your own way, but if the wooden version isn’t doing it for you, try getting at least a real quality knife.

This incense should be used outdoors.  Put it on the fire, and step back from the smoke or you will feel like you’ve been teargassed.

Burn on charcoal or in a roll of paper in a stone, ceramic, or pyrex type vessel, and MOVE!

If it needs to be said, do not wear this on your skin as it is.  You will need just a drop or two in a recipe for male attraction oil, but this is devotional oil for burning in an oil burner or consecrating or anointing Shango items.

Put the ingredients in a jar, and let stand in a cool, dry place for six months.