To get people familiar with the use of Sheloya’s Hoodoo Bones, help beginners to learn to read them, and give the message of the Orishas to the world, we’ve begun to do a daily reading.  Here is what the bones have to say today.

Here is how the bones landed from my point of view (click to enlarge):

and here is how they look oriented according to the Direction Finder bone, with captions: 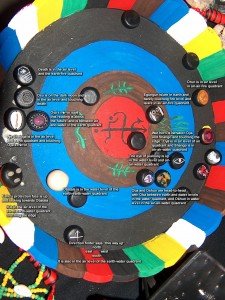 Today’s reading says that conflict is coming in the east.  It won’t just be between the usual rivals, but between seeming allies.  It will happen because people’s ancestors are close to their minds, but far from their hearts.  Save money and resources now so that you can weather the impending storm.

Since I live in Israel, this likely means that the conflict will start to the east between at least two Muslim countries.  Old rivalries will bring to light things that are currently covered by shallow agreements.  Those living near the conflict should prepare themselves because death is in the air.

Well, this is exactly why I shouldn’t do readings when I’m tired.  Apparently I was wrong about the two forces in the east being nations.  They were tectonic plates.