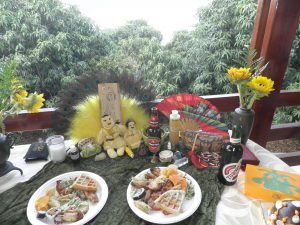 An ebbo is basically an offering to the Orishas.  There are many kinds of ebbo that practitioners of Vodun and west African diaspora practitioners do.

In some groups in the diaspora, some make a distinction between adimmu and ebbo, and base this on the outcome of divination.  Others say that adimmu is specifically a food offering, and ebbo involves animal sacrifice.  In still others, an adimmu is a small offering, where an ebbo is a gathering with larger offerings.  However, in some others, any offering is called an ebbo.

Ebbo Idupe/Ope/Lope – an offering of gratitude to the Orishas in general, or a specific Orisha who blessed or helped you.  You would give these to show awareness and thanks for your blessings, or to fulfill a promise you made to give offerings to the Orishas if they gave you a specific blessings.

Ebbo Isun/Sisun – an offering given by immolation, or burnt offering.  These are usually given to Shango, Aganju, Jakuta, and other fire oriented Orishas.  Meat, special woods, and other aromatic material can be used.  Also poems and praises and notes of thanks can be given.  Fireworks are also an option for ebbo isun.

Ebbo Iyeyun/Idanewan – an offering given by an act of kindness or donation to charity.  This is when the purpose of an ebbo is to feed or do some other kindness to their community, or to a person representative or under the guardianship of a particular Orisha.  Watering plants or feeding animals sacred to particular Orishas also counts.  It is said that when you feed an Orisha’s children, you feed that Orisha.  In places where it is still illegal to practice African belief systems, this is a common way that people manage to give offerings regardless of their situation.

Ebbo Misi – an offering given by preparing liquids sacred to certain Orishas a person needs direct bodily contact with, dedicating those liquids, and then applying  them.  Some are healing or cleansing, while others are simply applied and spilled to glorify the Orisha.

Ebbo Ti Abo – an offering given specifically to elicit protection or guardianship of an Orisha.  These are typically done for people in dangerous professions, or who are in need of some sort of psychic, spiritual, or physical shielding.

Ebbo Tito – an offering given to the Orishas one has offended, or to right a wrong.  This is done in conjunction with ebbo iyeyun to actually compensate for the damages.

There are more, depending on where one is and how things are done.  These are just some examples.  An ebbo can be a private or public event.  Usually on holidays, events are fairly public or at least Vodun friendly community wide, because the idea is to get that good energy to spread.

Do I need to be initiated to perform ebbo?

For some ebbo, you need to either be initiated or the first generation of a diaspora group, or supervised by a priest or initiate.  Some Orishas or other deities adopted by an African or diaspora community are more or less humane than others.   Some of the more humane Orishas can still be difficult to deal with energetically, or become angered if disrespected.

So formal offerings should be avoided or done under supervision.  However, both the initiated and the independent and laypersons can do most Ebbo Iyeyun at will.  Again, when you feed an Orisha’s children, you feed the Orisha.

So if you can’t go to the crossroads for Eshu, feed or give gifts to a child, an old person, or someone you recognize as a child of Eshu.  If you can’t go to the river for Oshun, do some kindness or give some money or fine perfume, jewelry, sweets, or other nice things for a beautician, fashion designer, seamstress, etc.

Helping children and the elderly glorifies Eshu.  Taking good care of yourself and making yourself and your world prettier glorifies Oshun.  Working hard and getting your hands dirty for a good cause glorifies Ogun.  Cleaning up the beach glorifies Olokun, Yemaya, Erinle, and Oshun.  Basically, there is no monopoly on doing good deeds to praise, thank, and be the hands of the Orishas in humanity.

You can also do ebbo misi or other preparations made by a serious adherent or initiate.  You are not completely unable to do anything just because you haven’t been initiated. If you are not very consistently spiritually active though, you should donate to a practitioner who is, to have offerings done on your behalf. Ile Baalat Teva does this, and most of our members are daily observant. So we can serve you, but we encourage you to find someone local to you if possible.

Some choose us because it is difficult to find someone who can serve from the area of Kemet that is known now as Egypt, so for now Israel/Palestine will do since it was a part of the kingdom at some point. We can also mummify if needed, and have Hathor and other deities’ temple sand we can deposit with the offering without violating any laws. I say this as an example of why you may want to seek out particular practitioners or houses to do your offerings. Different temples or houses or people have different specialties and features. If you’re outsourcing, you want your offerings done by the people most aligned with you and your goals.

Yes, practitioners of Vodun and many other African and diaspora belief systems fast.  Some are total fasts without food or water, as is done in some initiations wherein the person dies and is reborn.  Some are fasts for a specific purpose.  Some are partial fasts wherein someone will avoid food or certain types of foods for a time.  Some are long term or permanent taboos.  Some give up a certain activity for awhile as an offering.

For instance, if someone has been having financial troubles, they may limit their use of water for Oshun.  It may sound easy, but one must also stay clean and smelling and looking nice during that time.  So during their water fast, they may limit themselves to say, five liters of water per day for five days because five is sacred to Oshun, and so that they do not take a drop for granted.

One may also choose to keep the ways of a certain story or path of an Orisha for a time, or perform an activity in a way that specifically pleases an Orisha.  Taking the financial example again, one may dye some cloth yellow, green, or blue to please Oshun and Aje Shaluga, and make ritual items or something else beautiful from it.  One may do various activities or even science experiments as acts of devotion.